Well, I posted that last blog, copying in Kris 'Thrash' Weston and The Orb on Twitter, and this is what happened.

It took him a while to find the right words but he seems to have forgotten that all direct tweets generate a message that gets sent to the recipient's email account, even if the sender subsequently deletes them.

First attempt: So we start off with some more family-themed, Greggs-related, skip-related humour. Nowt wrong with that. 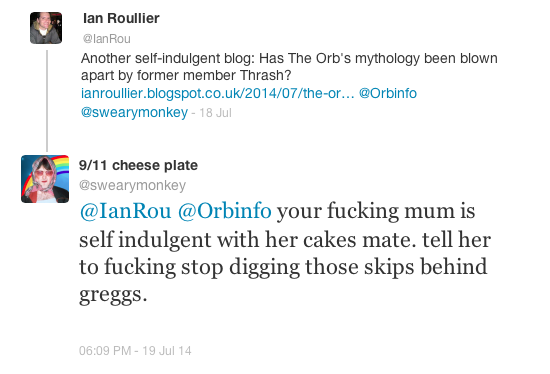 Second attempt: Then the insults start. 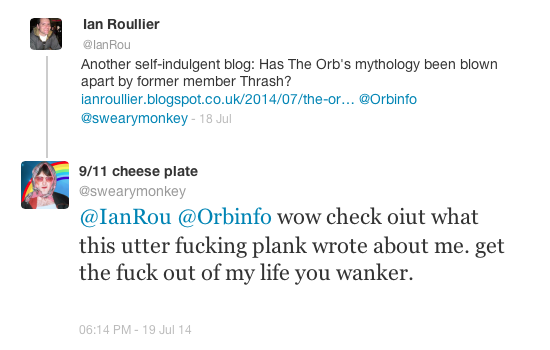 Third attempt: 'Plank' and 'wanker' clearly weren't descriptive enough so we'll add 'cunt' and a threat of violence shall we? As for support, perhaps he could have just said 'Thanks, but no thanks'? 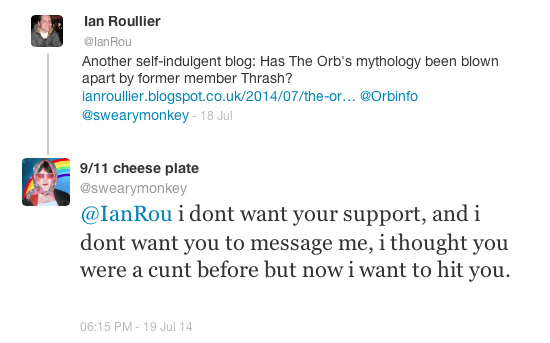 Final attempt: Aah, that's it, nailed it. No threat of violence as that would probably get him kicked off of Twitter. We'll double the 'cunt' count and make out that I've ruined his day to get some sympathy, when all I set out to do was give him some help. 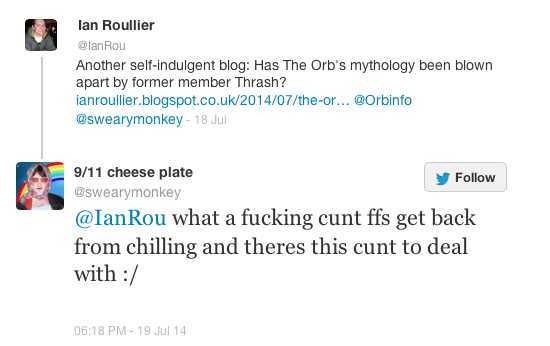 So, I approached KW as an Orb fan of around 23 years to offer my help and support by sending him the transcript of an interview I did with Alex Paterson about The Orb's live sets. This has somehow transpired in KW calling me a wanker and a cunt and saying he wants to hit me. To say I'm a bit miffed is an understatement. But, as mentioned in my previous post, this is not my battle to fight and just because somebody produces art that you love, that sometimes bears little or no reflection of the personality or likeabilty of the artist. I also need to learn that when someone says they don't want help, then I should respect that and channel my energies elsewhere.

There are a few thoughts I'd like to share and I'll leave it at this for now:

So what came first? Is KW like this because of the way he was treated back in the early 90s or was he treated like that because he showed the same attitude back then? I think it's probably the former. Even if it is the latter, that his personality led to the fall out, that still doesn't excuse his intellectual property being stolen and exploited without him receiving any credit or royalties. The law should be there to protect everyone. Despite his insults, I still hope KW gets justice and the royalties he deserves and is legally due. And when the financial damage is undone, I hope any damage done mentally or emotionally also falls away.

If this is someone who wants no support from people, why is he appealing to people like me, Orb fans from the time he was driving their creative output, to back his new album and raise £38,000? Why are those that have contributed called 'supporters' on his website and why add such niceties as 'I've made every effort to make sure your support counts!'? I was more than happy not to mention his rant or The Orb again, focus on the new project and contribute financially to it. I even considered writing a feature about the story for one of the music magazines I write for to help his cause. Then I read the tweets above. Regardless of how much I love The Orb's early output, why would I contribute any money to someone I tried to help and then treats me with no respect and calls me a cunt? Friends can call me that in jest and I don't mind in the slightest, and this is a great tune, but it's all about context. My original actions were rooted in kindness, but don't mistake my kindness for weakness.

Finally, why bother sharing the rant in public in the first place if KW wanted no reaction, no support and no comment from anyone else on it? Yes, writing it was probably cathartic for him but sharing it publicly will have made no difference in that respect. Surely he could just have written it, got it all out of his head and on to paper/screen and got on with starting legal action. Then he could easily have done what he insists he and everyone should do and focus on his new project rather than the past.

I have no idea what psychological issues may be involved here. Alex Paterson's Huge Ever-Growing Pulsating Ego? Or KW looking for drama and attention and then playing a game when people, whether they're long-term fans or not, actually give it to him? Perhaps he has just been completely messed up by the whole experience, for which he has my sympathy (regardless of whether he wants it or not). Perhaps he's insecure. Perhaps the ultimate truth is he's just not a very nice person. Who knows?

Whatever it is, I couldn't care less any more. I'll still listen to and enjoy Adventures Beyond The Ultraworld, UFOrb, Blue Room and the like but without an apology (which I know I'll never get) I won't be investing any more money, time or energy into Kris 'Thrash' Weston. Life's way too short.
Posted by Ian at 11:20